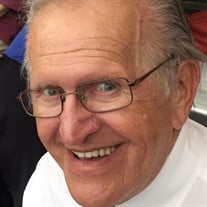 Ron was born in Chicago IL to Chester and Josephine Klimara, and was the older sibling to his brother Tom. He was the first member of his family to attend college, did so on a penmanship scholarship, and graduated from Lewis University where he met his loving wife of 56 years, Marilyn (Lynn) (Dore) Klimara, at a Lewis/St. Bernard’s School of Nursing mixer. They were married at St. Nicholas of Tolentine Catholic Church in Chicago. After having their two children, they relocated to Monticello, Indiana where they became parishioners at Our Lady of The Lakes Catholic Church. Ron had a tremendous sense of humor and was always quick with a joke and ready to laugh with you. When talking with friends, family, and even new acquaintances, he reached people with his humor and genuine interest, and made people feel as if they were the only person in the room. He was a dedicated, full-time caregiver to Lynn for her last 10 years and he lovingly took care of her throughout their marriage. He was always most concerned with the well-being of others, before himself, and this resonated in every conversation and interaction he had with friends, family, and even new acquaintances. He was an accountant by trade, and founded Wabash National Corporation, along with his two business partners in 1985. As their Chief Financial Officer, he took Wabash public on the NYSE in 1991, and along with his two partners, grew the semi-tractor trailer manufacturer to become the largest in the industry. Ron was very committed to his catholic faith throughout his life, including studying to be priest at Quigley Preparatory Seminary for four years, assisting with expansion projects at his local parish and diocese, and was a regular donor to a myriad of Catholic Charities. He loved great food, fine wine and spending time with family and friends. He also had a lifelong penchant for hot dogs, trips to the casino, fast food, and fast cars. He was very close to both his children and daughter-in-law, and was incredibly proud of the many accomplishments of his two grandchildren. Ron and Lynn retired to Sanibel Island and then Fort Myers, Florida and resided there for the past 30 years where Ron liked to spend time with Lynn, enjoyed spending time with his children and grandchildren on their frequent trips, enjoyed watching beautiful sunsets from the beach, cherished his daily walks, absolutely refused to sit and read a book during his 30 years of retirement, and loved watching sports in spite of his years of undying support for the Chicago Bears. Ron now joins Lynn who preceded him in death, and is survived by his two children, Colleen and Kevin (Angelique) and his two grandchildren, Miles (Kate) and Kelsey. Ron was also preceded in death by his parents, his brother Tom Klimara, and his dearest Aunts, Bernice and Jean Ziemba. A funeral mass will be held at 10:00 am Friday, May 20 at St. Columbkille Catholic Church, 12171 Iona Rd., Fort Myers, FL. In lieu of flowers, a memorial donation may be made to: Servants of Mary at 1439 Harlem Ave., Berwyn, IL 60402.

Ron was born in Chicago IL to Chester and Josephine Klimara, and was the older sibling to his brother Tom. He was the first member of his family to attend college, did so on a penmanship scholarship, and graduated from Lewis University where... View Obituary & Service Information

The family of Ronald J. Klimara created this Life Tributes page to make it easy to share your memories.

Ron was born in Chicago IL to Chester and Josephine Klimara,...

Send flowers to the Klimara family.