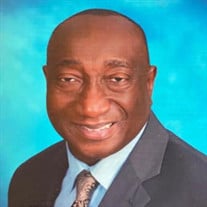 The Brainerd family announce with deep regret the passing of Dr. Theophilus Rotimi Brainerd, in Fort Myers, Florida, in the early hours of Friday morning, January 15, 2021. Dr. Brainerd was a noted Educationist, Researcher and Scientist from Sierra Leone. He was an alumnus of Prince of Wales Secondary School and a graduate of Fourah Bay College (FBC), University of Sierra Leone. He completed a post graduate degree in Economics from the UK Grimsby College of Technology. Dr. Brainerd also graduated with a Ph. D, in Marine Resource Economics from the University of Rhode Island, USA. Dr. Brainerd started his professional career in Freetown, at Rokel Secondary School, Tower Hill, where he served as Teacher/Acting, Vice-Principal. He also served as Instructor at the Faculty of Pure and Applied Science at FBC, for a very brief period and then left to serve as a Fishery Officer with the Department of Agriculture and Natural Resources. This work led him to positions as Fishery Economist with the Food and Agriculture Organization (FAO), and as Post Doctoral Fellow with the International Development Research Center in Canada. He authored several research publications and influential working papers in Fishing and Marine resources in Africa and the Americas. Dr. Brainerd spent most of his professional career working as a Scientist for the National Oceanic and Atmospheric Administration. He started off as Director of the Science Planning & Coordination Office and rose to serve as Deputy Director at the Southeast Fisheries Science Center. He and his wife later took up residence in Ft. Myers, Florida after his retirement in 2019. Rot, as he was commonly called by family and close friends, was a student of the arts and an avid swimmer. He is survived by his wife, Mrs. Jubilee Brainerd; his daughter Jasmine; Sisters: Folakeh, Thelma, Egbemidae, Sally and Julie; and brother Femi Brainerd. Other relatives include: the Fronts, Davies, Palmer, Thomas; Several Nieces and Nephews; and numerous other relatives in the Freetown, UK, Canada and the USA. We shall forever remember your gentle smile, warmth and friendship as a Husband, Father, Brother, Uncle and lifelong friend. *RIPP* Funeral and memorial service will be held at Saint Hillary’s Episcopal church 5011 McGregor Blvd Fort Myers, Florida 33901 on Saturday January 30th, at 11:00 am.

The Brainerd family announce with deep regret the passing of Dr. Theophilus Rotimi Brainerd, in Fort Myers, Florida, in the early hours of Friday morning, January 15, 2021. Dr. Brainerd was a noted Educationist, Researcher and Scientist from... View Obituary & Service Information

The family of Dr. Theophilus R. Brainerd created this Life Tributes page to make it easy to share your memories.

The Brainerd family announce with deep regret the passing of...

Send flowers to the Brainerd family.