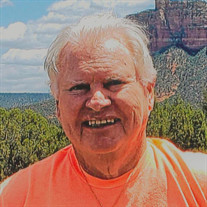 Thomas Harold Biggar passed away peacefully with his loving family by his side on Tuesday, August 3, 2021 while under Hospice Care at Joanne's House in Bonita Springs, Florida. He was 75 years old. Tom was born on August 23, 1945 in Scranton, Pennsylvania, the proud son to Melba V. (Hoover) and Thomas M. Biggar. He grew up in Old Forge, Pennsylvania and graduated from Old Forge High School in 1963, following which he enlisted in the United States Navy. Tom served in the Navy as an Air Crewman in Patrol Squadron 24 for four years and achieved the rank of ADJ-3 before being honorably discharged. Upon concluding his military service, Tom enrolled at the Pennsylvania State Police Academy in Hershey, Pennsylvania and graduated in November, 1968 and was thereafter sworn into the department as a State Trooper, proudly serving for 23 years until his retirement in 1991. Tom married Deborah A. (McDonald) Hoover on Christmas Day in 1995 and the couple enjoyed a happy marriage for over 25 years. Tom was also a man of faith and was an active member of the United Methodist Church. He was a lifelong fan of Penn State Football, proudly and often wearing the team colors of blue and white. Tom was also an avid handyman who enjoyed traveling, golfing and riding on patrol in his golf cart during retirement. Throughout his life Tom was an avid outdoorsman who especially enjoyed time spent hunting and fishing. Most of all, however, he cherished his family and treasured the time he spent with his wife, children and grandchildren. Sadly, Tom was preceded in death by his parents Thomas M. and Melba V. Biggar. Tom is survived by his loving wife Deborah of Fort Myers, Florida; his sons Thomas Biggar (Kellee) of Olney, Maryland and Chad Biggar (Tacy) of Danville, Pennsylvania; his stepsons Joshua Hoover of Chandler, Arizona and Nicolas Hoover of Philadelphia, Pennsylvania; his sisters Bobbye Biggar Evans of Taylor, Pennsylvania and Nancy Biggar Fray of Winston-Salem, North Carolina; grandchildren Thomas V. Biggar, Sydney E. Biggar and Abby J. Biggar all of Olney, Maryland. Tom also leaves behind many nieces and nephews, numerous extended family members and countless others who were proud to call him a friend. A Funeral Service for Tom will be celebrated by Pastor Dennis Lewis of Faith United Methodist Church at 3:00 PM on Tuesday, August 10, 2021 inside the Chapel at Fort Myers Memorial Gardens Funeral Home, 1589 Colonial Boulevard, Fort Myers, Florida 33907, (239) 936-0555. Guests will be received for Visitation for two hours preceding this service beginning at 1:00 PM also inside the funeral home chapel. At the conclusion of these ceremonies, Military Honors for Tom will be rendered by the United States Navy Honor Guard. Tom had two requests for his memorial service and the family requests your assistance in honoring these final wishes. First, please attend his service wearing your Penn State fan clothing or dress in the team colors of blue and white. Second, in lieu of sending flowers, please instead make a donation in his memory to the American Cancer Society, P.O. Box 22478, Oklahoma City, OK 73123, (800) 227-2345 or through the internet at:- https://www.cancer.org/involved/donate.html For those who can not attend the family invites you to join by clicking the link below and joining the live stream. The live stream will be open and able to join at 2:50PM for the 3PM service. https://www.econdolence.com/join-viewneral?jc=10000:+I1zx6GtZgrArCVU2rXtIsf6+XGQGbcC:bT0OIyt3ovM3RFpq7esVRg==:HYJ8iDSzNBOXnrjXzFGjtg== To share a story or photo, leave a tribute or to offer condolences to the family at this difficult time, please visit Tom's memorial webpage at www.fortmyersmemorial.com and sign his guestbook.

Thomas Harold Biggar passed away peacefully with his loving family by his side on Tuesday, August 3, 2021 while under Hospice Care at Joanne's House in Bonita Springs, Florida. He was 75 years old. Tom was born on August 23, 1945 in Scranton,... View Obituary & Service Information

The family of Thomas Harold Biggar created this Life Tributes page to make it easy to share your memories.

Thomas Harold Biggar passed away peacefully with his loving family...