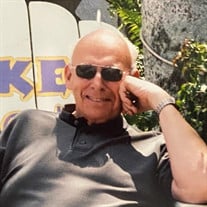 Thomas Edward Roehm Jr. Born in Dayton, Ohio March 12, 1932. Died in Ft. Myers Florida on July 8, 2021. Preceded in death by wife Phyllis Evalyn Roehm. Survived by Daughters Leslie Roehm Reese, Susan Roehm Ryan and son Thomas E Roehm III. (LeeAnne), Six GrandChildren, Alexa Reese, Max Klocko, Zachary Ryan, Colleen Ryan, Anna Katherine Roehm and Elizabeth Roehm. One Great Grandson Reiko Henning. Tom grew up playing sports in high school. He was the star center for the Fairview High basketball team and played baseball. It was in high school when he first met his wife Phyllis, through her brother Paul Garrod who was one of his best friends. After one year at Ohio State University, Tom was drafted and served in the Korean war. He was stationed at the Presidio in San Diego, California. It was during that time that he continued to court Phyllis. He asked her to marry him and sent her an engagement ring in the mail. After his discharge from the Army in January he married Phyllis on February 4, 1956. They celebrated their 65th wedding Anniversary February 4, 2021. During this time, he was accepted to and graduated from General Motors Institute of Technology in Flint MI (now Kettering University). Receiving his Master of Science in Mechanical Engineering degree was one of his proudest accomplishments. Tom’s well respected engineering career path took a few turns, starting out with the Shell Oil Company as a salesman, then working for Frigidaire (a General Motors company at that time). After several years he opened his own business called Design Aire in Dayton, OH which served the residential and small commercial customers with the installation and maintenance of Trane heating and air products. In 1972 Tom accepted a job in Clarksville TN with the Trane company where he had various roles from field engineer to plant operations. He finished out his career working for the Tennessee Department of Environment and Conservation (TDEC) in the water pollution control division. In the 1960's Tom started sailing at Indian Lake Yacht Club in Russell Point Ohio. He discovered a sport that both challenged him mentally and fulfilled him spiritually. Tom went from racing Lightning Sailboats to pleasure sailing on his Island Packet 37 in the blue waters of the Gulf of Mexico and the Caribbean. Tom said one of the best things he did was to get into sailing as it was something the whole family participated in and gave him many happy memories. Tom was a loving husband, father, caring friend, and boss. He enjoyed music, Sinatra, Big Band and Dixieland Jazz. He had a great sense of humor and a quick wit. Tom leaves many memories with the friends he made from the Telford Ave gang in Dayton Ohio to his friends at Trane Company in Clarksville TN and most of all his family. At this time, no service is planned. On a future date, Tom and Peg’s ashes will be spread in their favorite cove in Kentucky lake near Paris landing, thus fulfilling their wishes. In lieu of flowers, feel free to honor Tom with a donation to a charity meaningful to your heart.

The family of Thomas Edward Roehm Jr created this Life Tributes page to make it easy to share your memories.