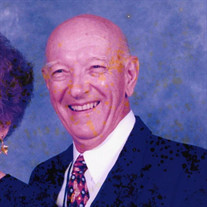 Walter Charles Lankenau, 94, of Fort Myers, formerly of Weehawken, NJ, passed away Monday, June 7, 2021. He was born November 24, 1926 in West New York, New Jersey to John and Louise (Colburn) Lankenau. Walter’s sense of adventure led him to enlist in the Navy at age 17 to serve in World War II. After raising a family, Walter and Leona traveled several times to Spain, Portugal, and Greece. Later, his love of the sea brought him to take many cruises throughout the Caribbean, South America, and Alaska. He had a long career in banking, working first for Chase Manhattan and later retiring from Sun Bank in Naples. After retiring from banking, he pursued additional adventures working on-call for FEMA, which took him to disaster sites throughout the United States for about ten years. After moving to Florida, golf became a passion which he pursued until just a few years ago. He also handcrafted several decorative lampshades of seashells joined together by leading in stained glass. He was a resident of Seven Lakes since 1980. Walter had a sharp wit and enjoyed a good joke or play on words. Mr. Lankenau is survived by his wife of 72 years, Leona (Hoefer) Lankenau and his son, Walter Charles Lankenau, Jr. He is preceded in death by brothers, John, Robert and Alfred and his sister, Katherine. In lieu of flowers, memorial contributions may be made to Hope Hospice, www.hopehospice.org. A visitation will be held from 2 - 4 PM Saturday, June 12, 2021 in the chapel of Fort Myers Memorial Gardens Funeral Home, 1589 Colonial Blvd., Fort Myers, FL 33907, 239-936-0555. Online condolences may be offered at: www.fortmyersmemorial.com.

The family of Walter Charles Lankenau created this Life Tributes page to make it easy to share your memories.

Send flowers to the Lankenau family.