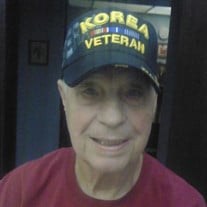 Warren Lee Harvel, of Fort Myers, FL, passed away peacefully on March 4, 2022, with his loving family by his side. He was born on September 19, 1930, in Burton's Bridge, IL to Wates and Irma (Ashbaugh) Harvel. Warren leaves behind his wife of 67 years, Jane, and their eight children: Jodi (Merwyn) Hall of Greentown, IN, Jeffrey (Diane) Harvel of Crystal Lake, IL, Timothy Harvel of Port Charlotte, FL, Gary (Christine) Harvel of Cape Coral, FL, Sara Harvel Pittman of Gold Bar, WA, Sue Harvel Lowry of Fort Myers Beach, FL, Michael (Jody) Harvel of Crystal Lake, IL, and Joshua (Renee) Harvel of Cape Coral, FL, as well as seventeen grandchildren, twelve great grandchildren, three sisters: Beverly Englebrecht, Toni Buzbee, Teresa Tipton, and numerous nieces and nephews. After graduating from Crystal Lake Community High School in 1949, Warren was a proud veteran of the Korean War where he served in the U.S. Army from 1950-1953. Soon after, he married his wife, Jane Wolfram Harvel, on April 10th, 1954, in Crystal Lake, IL. He was a staple in the Crystal Lake community, working 30+ years as a member of the Carpenters Local 2087 up to the time of his retirement in 1990, as well as serving as coach/manager of Frank's Toy and Hobby little league team of the Continental Little League for many years. After 1990, Warren enjoyed his retirement in Fort Myers, FL, where he spent the remainder of his life with his wife, family, friends, neighbors, and taking care of his garden. He will always be remembered for his infectious smile, tireless work ethic, and dedication to others. He will be greatly missed by all. Warren is preceded in death by his parents, brother Jack, and four sisters: Melba, Betty, Sharry, and Linda. A memorial will be held at a later date. Donations in Warren’s honor may be sent to the Hope Hospice Hope Development Department at 9470 HealthPark Circle, Fort Myers, FL 33908 or by visiting www.hopehcs.org/donate.

Warren Lee Harvel, of Fort Myers, FL, passed away peacefully on March 4, 2022, with his loving family by his side. He was born on September 19, 1930, in Burton's Bridge, IL to Wates and Irma (Ashbaugh) Harvel. Warren leaves behind his wife... View Obituary & Service Information

The family of Warren Lee Harvel created this Life Tributes page to make it easy to share your memories.

Send flowers to the Harvel family.