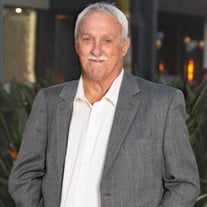 William “Ross” Hooker, age 74, a proud conservative who loved America, passed away surrounded by family on Wednesday, September 8, 2021 at Healthpark Hospital in Fort Myers. Born on October 23, 1946 in Roanoke, VA., his family moved to Belle Glade, FL when he was very young and then moved to Boynton Beach, FL a few years later. His family and friends describe him as a young man full of mischief; always getting in trouble, pulling pranks, joking and making people laugh. Ross was a vital part of the Seacrest High School Varsity baseball and basketball teams and graduated in 1964. He continued his education at his father’s alma mater, Virginia Tech, served four years in ROTC (honorably discharged 1968) and received a Bachelor of Science in Civil Engineering in 1969. During his college years, he was very active in Tau Epsilon Kappa (TEK) fraternity and made lifelong friends who say he is iconic, legendary, and always incredibly entertaining. In 1970, Ross married the love of his life, Pandora and they moved to Lee County, FL. After working in the engineering and construction industry for many years, he became a state Certified General Contractor in 1979 and has built thousands of commercial and residential buildings in Lee and the surrounding counties. He loved sharing his knowledge and mentoring others in construction and life. His loss will be felt deeply in the community. Ross was a devoted husband, father, grandfather, brother, uncle, and friend. Throughout his life, he loved sailing his Hobie Cat in the Gulf of Mexico, vacationing with his family and traveling with his wife; cruises, skiing in Colorado, Yellowstone and Alaska were a few of his favorites. He also loved Panama off-shore fishing trips with his friends and his trip to Spain with his brother Jeff. His biggest joys later in life were centered around watching his grandchildren play sports. One of the last things he did in his life, was watch his grandson Riley play baseball in a National All-Star baseball tournament online. It also brought him great joy watching his granddaughters play volleyball all through high school and college; even if he had to catch it online, he never missed a game. His grandchildren lovingly called him Poppy and they were his biggest fans, as he was theirs. You could see and hear his love for them, when he spoke of them and his beautiful blue eyes lit up. He was an honest, genuine man who loved people, loved his dogs, lived life fully and loved to make people laugh and smile. He is preceded in death by his parents, John Walter and Eloise Hooker of Belle Glade, FL. He is survived by his wife of 51 years, Pandora, and their 3 children; Nicole (Matt) Bickelhaupt, Lacey Hooker, Derek (Jacqeline) Hooker; siblings Jack (Susan) Hooker, Richard Hooker, Jeffrey (Lisa) Hooker, and Robin Hooker; grandchildren Bowen, Larra and Libby Bickelhaupt, Morgan and Liam Black, Riley and Drake Hooker, Juliann Geremonte; and 2 great-grandchildren, EmmaLee and Natalie, and dozens of nieces and nephews who adored him. Memorial Services for William Ross Hooker will be at Hope Lutheran Church on Sunday, September 19, 2021 at 2pm. The address is 25999 Old 41 Rd., Bonita Springs, FL. The services will also be live streamed. There will be a very small gathering for immediate family after the service. A Celebration of Life is being planned for his 75th birthday, October 23, 2021 (tbd). In lieu of flowers, monetary donations can be made, in his memory, to your local food bank. He never wanted anyone to be hungry.

The family of William "Ross" Hooker created this Life Tributes page to make it easy to share your memories.

Send flowers to the Hooker family.