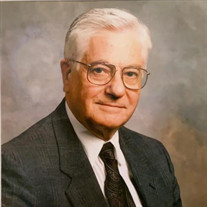 Charles Michael Hayward, 92, of Fort Myers, Florida and Mashpee, Massachusetts, died peacefully at home in Ft. Myers on Wednesday, March 31, 2021. He was born on September 24, 1928 in Rosario, Argentina, the son of Frank and Enid (Warde) Hayward. Michael graduated from La Universidad de La Plata in 1953 with a Bachelors of Science degree in Electrical and Mechanical Engineering. From 1954 to 1956, he participated in a graduate apprentice training program at Marconi’s Wireless Telegraph Company in England. After completing a radio communications course at Marconi College, he entered Marconi’s Centimetric Development Group, where he helped to develop the H.M. 300 S.H.F. Sixty Channel Radio Telephone Equipment. On March 31, 1956 he married the love of his life, Sonia (Laight) Hayward. They moved from England to Ottawa, Canada, where from 1956 to 1959, Michael was employed at Computing Devices of Canada. Quickly advancing to Senior Engineer, he developed a low-level phase and amplitude sensitive frequency divider for use in aircraft navigation equipment. He also developed an electronic timer which records accurate timing pulses on a film of the flight path of a missile. In 1959, Michael moved to Massachusetts and joined Epsco Inc. as a Senior Engineer, where he co-developed a high speed, programmable, analog-to-digital converter for use in an automatic missile checkout system. After his time at Epsco Michael struck out on his own, first with the launch of Dynamic Measurements Corporation, then the establishment of Hayward Consulting & Engineering, and finally the founding of Hybricon Corporation, in 1978. It was with Hybricon that Michael created a lasting legacy. What started as a tiny business in the basement of his home grew into an extremely successful engineering and manufacturing company in Ayer, MA, employing hundreds of people in the local area during its 32-year run and making a name for itself as a leader and innovator in its field. As Chairman and CEO, Michael was still an engineer at heart and in mind – he was a Life Senior member of the Institute of Electrical and Electronics Engineers (IEEE) – and over the years he was awarded several patents for innovative technology. Michael always attributed his and Hybricon’s success to the empowerment of individuals at all levels throughout the organization, and he enjoyed nothing more than coaching and leading his employees to achieve new heights. Other than his family, Hybricon was the accomplishment of which Michael was most proud. On the weekends and on holiday, Michael enjoyed being by or on the sea. He loved boating, whether via sailboat, power boat, or cruise ship, windsurfing, rowing – anything on the water. Or IN the water – he also enjoyed spending hours knee-deep on the shore in front of his home on Cape Cod, digging up clams and mussels for dinner. On land, his preferred game was tennis, and he regularly challenged his friends and relatives to take him on in a game. He loved cars, and in the ‘60’s he took up auto racing in his 1962 TVR Grantura, a British sports car – a car which, 50 years later, he had restored to its former glory. Long after he gave up auto racing, he still “entertained” his family with his driving skills from those racing days, particularly with a tactic subsequently dubbed “the Hayward Slide-Out Maneuver”. Michael liked all things mechanical, particularly clocks, and after his retirement he turned his engineering brain towards tinkering with, fixing, and rebuilding antique clocks. He also enjoyed listening to classical music and renewed his interest in playing the piano in his late 80’s (it turns out it doesn’t matter how old you are, you still don’t want to practice). Michael most enjoyed spending time with his family, with whom he shared many adventures and travels, and he was always planning (or plotting) the next one. Michael is survived by his son, Andrew Hayward, and his wife Tristen, of Fort Myers; daughter Anne Cahill and her husband, Gerald, of Groton, MA; granddaughter Hayley Cahill of Groton; and several nieces and nephews in England and Argentina. He was preceded in death by his beloved Sonia; his parents, Frank and Enid Hayward; his sister, Simone Mathews; and his daughter-in-law Elaine Hayward. Memorial services will be held at a later date on Cape Cod. Online condolences may be made at: www.fortmyersmemorial.com. To view Charles' video tribute, please follow the link below: https://www.tributeslides.com/tributes/show/WC6XWSYSXJFL63CB

The family of Charles Michael Hayward created this Life Tributes page to make it easy to share your memories.

Send flowers to the Hayward family.