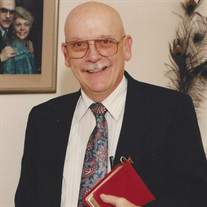 ﻿Lehigh Aces, FL/Wausau, WI - Reverend Donald K. Dinsmore, 84, passed away peacefully Friday, December 17, 2021. He was preceded in death by his parents, Ray and Flo, and his brother, Robert. He grew up on the south side of Chicago, followed by divinity studies at the University of Wisconsin Eau Claire, and Garrett-Evangelical Theological Seminary, where he was ordained by the United Methodist Church. Don is survived by his adoring wife, Barbara, married 65 years. She was the love of his life since they met at age 16. He is survived by 5 loving children - Donalea, Madison, WI, Russell (Connie Pace), Palmyra, VA, Debbie Stoehr (Stan), Neenah, WI, Robert (Jennifer), Killeen, TX, and Earle (Ling), Naples, FL. Don showered his love on 11 grandchildren, 10 great grandchildren and 1 great great grandchild. Family time was cherished. Regular gatherings were filled with card games, dominoes, good food and plenty of laughs. Don’s life was dedicated to serving others and ministering to the most needy, especially those suffering grief and loss. He ministered to numerous rural churches in Wisconsin as a student and after ordination. He found a home in Wausau, WI while serving at First United Methodist Church of Wausau, where he remained Pastor Emeritus. At 35, Don felt a strong calling to focus his life on those grieving from illness or loss of a loved one. He went back to school at the University of Virginia Hospital to be certified as a supervisor of clinical pastoral education (CPE). In Jackson, Mississippi, he served at the University of Mississippi Medical Center, while he also shepherded the flock at Fondren Church, taught at Millsaps College and provided private grief and emotional counseling. Don later returned to Wausau, where he was Director of Pastoral Care at Aspirus Hospital for over 20 years. After retirement, Don continued his life as a snowbird, spending winters in Lehigh Acres, FL. He found a new church home in Cypress Lake United Methodist Church. Don continued his life of stewardship as chaplain at Bell Tower Residence Assisted Living in Merrill, WI, supervised CPE at Milwaukee and Chicago hospitals, and volunteered for the Kairos Prison Ministry at Desoto Correctional Institute (FL). He directly touched thousands of grieving souls, and trained hundreds of clergy and lay persons. Don’s other talents included acting and singing. He often entertained in community theater and occasionally acted professionally. He regularly stole the show with his bigger than life comedic performances. Some of his favorites were Fagan in Oliver and King Pellinore in Camelot. He was a fixture in the church choir whenever he wasn’t in the pulpit, and graced numerous choirs throughout his life. When the body was willing, he was an active golfer and racquetball player. Don was a wonderful story teller and his jokes always lit up a room. Somehow he knew everyone in town and they knew him. A Celebrations of Life will be held at 11am on Wednesday, December 22 at Cypress Lake United Methodist Church. A subsequent celebration will be held in Wausau, WI sometime in the new year. In lieu of flowers, the family wishes to continue his legacy of service by directing charitable gifts to the Endowment Fund at First United Methodist Church of Wausau, 903 N 3rd Street, Wausau, WI 54403, fumcwausau.org.

&#65279;Lehigh Aces, FL/Wausau, WI - Reverend Donald K. Dinsmore, 84, passed away peacefully Friday, December 17, 2021. He was preceded in death by his parents, Ray and Flo, and his brother, Robert. He grew up on the south side of Chicago, followed... View Obituary & Service Information

The family of Donald K. Dinsmore created this Life Tributes page to make it easy to share your memories.

Send flowers to the Dinsmore family.