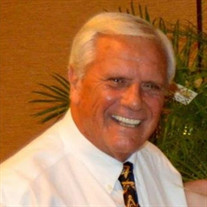 The family of Donald R. Johnson, Sr, announces with great sorrow his passing on August 25,2021. Don was born in Philadelphia, Pennsylvania in 1944 and was lucky enough to see most every part of this world, which he shared with his wife of 56 years (Frances E. (O'Bannon) Johnson. Few things made Don more proud than his country, his family, and his Masonic affiliation. Don was a member of the United States Army and proudly served during the Vietnam War. Following in his footsteps, his sons Donald Johnson, Jr. and Kevin D. Johnson, Sr. both also served in the United States Army, and served overseas during Operation Desert Shield/Desert Storm. Nothing brought more joy and love to Don's life than time and interaction with his family, both immediate and extended. The Donald Johnson, Sr. family reaches across many cities and many states with nothing but love and joy in the hearts of everyone who has ever come into contact with "YaYa". The eldest grandchild, Kevin, Jr., started the "YaYa" tradition that stuck all the way through from Kevin, Jr, to Amanda (Mandi), Lindsay Blair, Lindsay Lee, Ariel, Anthony, Katie, Brian, and Ben. The grandchildren all knew the love that a grandfather has. But not many have the chance to meet, interact, and get to know their great grandchildren - Landyn, Kaaliyah, Liam, Sophia, Marina, Absher, Hayes, Sasha, Tiegen, and Remi. Don was a member of the Tropical Masonic Lodge #56 of Fort. Myers, and he enjoyed his time there, interacting with Brothers throughout Southwest Florida and Virginia Masonic fraternities. The Brothers of the 29th Masonic District of Virginia and Specifically the DuPont #289 Masonic Lodge of Hopewell, Virginia will miss Brother Don as he was a regular visitor in Virginia. A Graveside Service for Donald will take place at 10:00 AM on Friday, September 3, 2021 inside the Field of Honor at Memorial Gardens Cemetery. Masonic honors for Donald will be provided by his Brothers from Tropical Masonic Lodge No. 56. Fellow veterans from the Fort Myers American Legion Post No. 38 will be present to offer a bugle rendition of "Taps" along with a 21-gun Rifle Salute. Military Honors provided by the United States Army will follow. After presentation of the United States Flag to Donald's widow Fran, Don will be laid to rest with burial of his urn at the adjacent Cross Memorial Section. Frances Johnson, Donald R. Johnson Jr. & Sally Gopfert Willis, and Kevin & Denise Johnson sincerely appreciate all of the kind wishes and prayers they have received as they bid their loved one farewell. Please feel free to leave condolences here on the Memorial Gardens Website. No donations of any kind will be received but are appreciated and respected. Thank you, and we love you all, The Johnson Family as a whole

The family of Donald R. Johnson, Sr, announces with great sorrow his passing on August 25,2021. Don was born in Philadelphia, Pennsylvania in 1944 and was lucky enough to see most every part of this world, which he shared with his wife of 56... View Obituary & Service Information

The family of Donald Robert Johnson Sr. created this Life Tributes page to make it easy to share your memories.