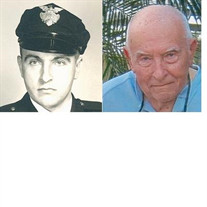 James William “Bill” Mangan slipped away quietly Feb. 27, 2021 in Ft. Myers, FL of natural causes. It was uncharacteristic for someone of his presence and attitude, but it was a well-deserved rest at the age of 92. Born to Roscoe Mangan and Mary Ellen Newlon in Kokomo, IN on April 5, 1929, he and his beloved identical twin Robert Eugene “Bob” Mangan were their only children. He grew up during the Great Depression, and spent many happy summers at his grandparents’ farm caring for livestock and playing outdoors. Growing up, he was a hard worker holding jobs from the time he was 12 years old. He and his brother were accomplished athletes in baseball, football, and especially boxing. A reputation for toughness both inside and outside the ring earned them both Golden Gloves and the nicknames “Big Poison” and “Little Poison”. In 1947 he met Kathryn Karbula, and their romance began when he walked her home from from a party he wasn’t invited to after chasing off the fella she came with. They married August 6, 1950 and would remain each other’s lifelong companion, nearly reaching their 71st wedding anniversary. Bill Mangan was someone who was asked for by name because had a reputation for getting the job done and done right. He began his career by serving in the Army in General Douglas MacArthur’s office in Tokyo, Japan in 1947. He would go on to become a police officer and eventually a detective with the Mansfield, Ohio Police Department from 1953-1962; he also worked in the Mansfield Sheriff’s Dept. and was a probation officer. He ran a few businesses of his own including a drive-in burger joint, a hardware store, and a security business in Mansfield. One of his favorite moments in his career was serving as a bodyguard for the actress Jayne Mansfield at a local event. He later worked for the US Postal Service in Ft. Myers, FL until his retirement in 1985. He is preceded in death by his twin brother Robert, and survived by his wife Kathryn Mangan (Karbula) and his daughters Lori (Andrew) Trumbo and Mary (Tom) Miller as well as 5 grandchildren: Jacob, Harrison & Angela Trumbo, Melissa Miller Caudell, & Kinsey Miller Monday, and 10 great-grandchildren who loved him and will miss him dearly. He is also remembered fondly by his nieces and nephews David (Debbie) Mangan, Robb (Annette) Mangan, Nancy Fox, and Jenny (Jeff) Morris. If you knew Bill, go enjoy a good burger and a bowl of ice cream in his memory!

James William &#8220;Bill&#8221; Mangan slipped away quietly Feb. 27, 2021 in Ft. Myers, FL of natural causes. It was uncharacteristic for someone of his presence and attitude, but it was a well-deserved rest at the age of 92. Born to Roscoe... View Obituary & Service Information

The family of James William "Bill" Mangan created this Life Tributes page to make it easy to share your memories.

Send flowers to the Mangan family.