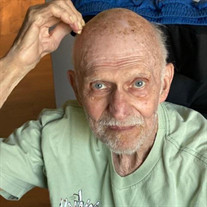 Leslie Clarence Leach was born in Detroit, Michigan on April 21, 1931. He attended Ft Wayne Bible College, served in the Army during the Korean conflict, and married his life-love, Kathryn Ann Vorholzer, on December 3rd, 1955. Les loved the Lord and served Him his entire life, from mission trips as a younger man to being active in various aspects in every church they attended through the years. Always concerned with men’s souls, even in his last days Les was asking his healthcare workers “if they have accepted Jesus into their heart.” A Master Model Builder for Ford Motor company from 1956 to 1996, Les was an expert at working with all things wood and loved nothing more than a challenging project. He retired from Ford in 1996 and waited for Ann to do the same. Upon Ann’s retirement from nursing in 2001, they relocated to Ft Myers Beach Florida, where they enjoyed taking their boat into the gulf for fishing. They remained in their Gulf-access “dream home” for 20 years until his declining health dictated that they move closer to their daughter Annette and family in Clermont, Florida in April of 2021. Les and Ann enjoyed another 9 months of independent living together in their Clermont, FL townhome, with Les still able to safely drive, until his health declined beginning in January 2022 and ultimately ended in his passing. In addition to his love of boating and fishing, Les had real lifelong passion for music. In his younger years he sang in the church choirs, and in his retirement years in Ft Myers Beach he learned to play the harmonica often joining with other retirees in their subdivision for “jam sessions.” He is certainly enjoying singing continuous praises in heaven as you read this!!! Les is survived by his wife of 66 years, Kathryn Ann Leach, his daughter, Annette Connelly of Clermont, FL and his granddaughter, Haunna Connelly, of Orlando, FL. Les was preceded in death by his older sister Priscilla and his older brothers, Harl and Lester.

The family of Leslie Clarence Leach created this Life Tributes page to make it easy to share your memories.

Leslie Clarence Leach was born in Detroit, Michigan on April...

Send flowers to the Leach family.