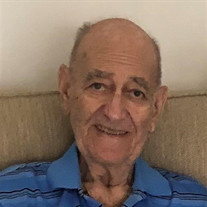 The narrative of Mark Grieco Sr.’s life is a story of love, character and family. It is a Bronx Tale. Born on April 21, 1935 to Henry & Angelina Grieco his Bronx roots never left him as he played basketball in the parks with his older brother Dr. Michael Grieco, attended Mount St. Michael high-school and ultimately graduated with honors from Manhattan College with a degree in accounting. But perhaps the richest treasure of this City’s borough was that it was too the birthplace of the love of his life and wife for 61-years, Joy Adelaide Lede. After achieving initial success at Maule enterprises in Florida, Mark returned back home to New York City where he worked for Carelton-Stuart for the remainder of his career. As Chief Financial Officer, he was instrumental in the growth of their long-term partnership with the Carrier Corporation in Syracuse New York. Mark was the loving father of 3-children; Mark Jr. Suzanne & Elizabeth. He coached their Little League, helped them learn math and was there to celebrate their many achievements. Most importantly, he installed the values of hard work, kindness and education into his children. A member of the New York Athletic Club, Mark was thrilled by sport as a life-long fan of the Yankees, Knicks and New York Football Giants. Sunday afternoons were filled with food, drink, family & cheering. Mark too enjoyed playing sport in particular, squash, tennis & golf. As he grew older, he could be peacefully found on the lanai of his house on the 7th hole … Seagram’s VO Manhattan in one hand, Joy’s hand in the other. He was Mr. Grieco to most, Husband to one, Dad & Grandpa to a few, friend to all. Mark Eugene Grieco passed away peacefully with his loving wife by his side on March 5, 2022, at his home in South Fort Myers, Florida. There will be a memorial service Wednesday, March 16, 2022 at 1:30 PM at St John XXIII Catholic Church 13060 Palomino Lane, Fort Myers, FL 33912. In lieu of flowers, please send a donation to Hope Hospice https://hopehospice.org/donate/

The narrative of Mark Grieco Sr.&#8217;s life is a story of love, character and family. It is a Bronx Tale. Born on April 21, 1935 to Henry & Angelina Grieco his Bronx roots never left him as he played basketball in the parks with his older... View Obituary & Service Information

The family of Mark Grieco Sr. created this Life Tributes page to make it easy to share your memories.

The narrative of Mark Grieco Sr.’s life is a story of love, character...