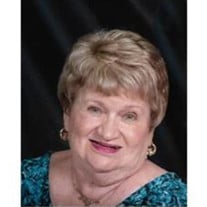 Patricia Lancellot, age 86, of Naples, FL and a resident of Delaware County, PA for over 50 years, died on February 11, 2022. She was born in Philadelphia on September 20, 1935 to her parents, Daniel and Mary O’Connor. Patti was a very proud graduate of West Catholic Girls’ High School. She then worked with the Internal Revenue Service. A co-worker introduced Patti to her brother, Joe, who was serving in the Air Force and home on leave. A long-distance romance ensued which resulted in their marriage on his next leave. They both returned to Germany where they lived until Joe’s discharge. In the early 1970’s she worked at Penncrest High School in Media. “Mrs. L” was much loved by students and faculty in her front office role. Many a hall pass or late pass were issued by her with either a brief admonition or a smile, and usually with both! In 1986, Joe and Patti formed Sir Lancellot Courier Service, a same day delivery firm. Their office also served as a Media, PA post office substation. Patrons would, of course, receive stamps and a smile. When the Lancellots moved to North Fort Myers in 2002, the front of their home had a large green shamrock proudly on display. St. Patrick’s Day was her favorite holiday. Patti would be adorned in her famous green outfits on this day and also for the entire month of March. Her signature laugh was infectious. Patricia was predeceased by Joseph, her husband of 66 years, brothers Daniel and Phillip O’Connor and granddaughter, Rachel Lancellot. She is survived by her sons, Michael (Joanie) and Richard (Joan), daughters, Maureen (Paul Musso) and Lisa (Jeff Ball). Her six grandchildren, nieces and nephews meant the world to her. A Funeral Mass for Patricia will be celebrated at 10:30 am on Friday, March 4, 2022 inside at Sanctuary at St. Therese Catholic Church, 20115 North Tamiami Trail, North Fort Myers, Florida 33903, (239) 567-2315. In lieu of flowers, the family is requesting donations in Patricia’s name to be sent to Vitas Community Connection, Program 19, 4980 Tamiami Trail North, Suite 102, Naples, FL 34103. To share a story or photo, leave a tribute or to offer condolences to the family at this difficult time please visit Patricia's memorial webpage at www.fortmyersmemorial.com and sign her guestbook.

Patricia Lancellot, age 86, of Naples, FL and a resident of Delaware County, PA for over 50 years, died on February 11, 2022. She was born in Philadelphia on September 20, 1935 to her parents, Daniel and Mary O&#8217;Connor. Patti was a very... View Obituary & Service Information

The family of Patricia A Lancellot created this Life Tributes page to make it easy to share your memories.

Patricia Lancellot, age 86, of Naples, FL and a resident of Delaware...

Send flowers to the Lancellot family.