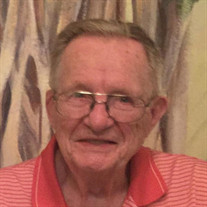 Robert Owen Benjamin of Ft Myers passed away April 27, 2021. Bob was born June 10, 1926 in Rockford IL, the son of Earl & Lily Benjamin. As the eldest son, he was the watchful big brother to his 4 sibling who at times were referred to as ‘The ‘Lil Rascals’. Upon graduating from Rockford West HS, Bob enlisted in the Navy where he was in officer’s training and afforded the opportunity to advance his education attending Princeton University, University of Michigan and John Carroll University. After being discharged from the military, Bob returned to Rockford where he finished a degree in accounting and business administration at Rockford Business College. In 1948, he married Lorraine Evelyn Adamson. They started their family in Rockford simultaneously as Bob started a long and success career with George D. Roper Industries. Bob stayed with Roper industries throughout his career despite several acquisitions. In 1958, he was promoted and transferred to Athens, GA when the parent company purchased a manufacturing plant in that area. In 1963, Bob was again transferred and promoted to another new acquisition, this time to Piqua, OH. In 1989, he retired as President after 34 years with Enpo-Cornell / Prosser-Enpo Industries. He was asked to stay on as a post-retirement consultant and given the title Vice-CEO. In Piqua, Bob was very involved in the community serving in many capacities including a charter member of the local hospital chaplaincy program; serving on the Piqua Area Chamber of Commerce; participating on the PTA; serving as a 25-year member of the Piqua Kiwanis Club; and volunteering his time to Junior Achievement as an advisor. Bob also was one of the founders of Edison Community College in Piqua. Church life was very important to Bob – including helping to found a Methodist church in Athens, GA; serving as Lay Minister in Green Street and Grace Methodist Churches in Piqua; along with Lorraine helping to start a local chapter of Christian Couples Club / Stonecraft Ministries; and serving on a committee that brought the Billy Graham Evangelistic Association to the area for a crusade. Bob also led many home-based Bible studies. As an avid athlete, Bob loved playing and watching all sports. He played softball well into his 70’s, enjoyed golfing and coaching 5th & 6th grade boys basketball at Washington Elementary School in Piqua. Up until a few months prior to his death, he routinely rode his bike throughout his community. After retiring, Bob & Lorraine moved to Sarasota Florida. There he was active in Sarasota Baptist Church and maintained strong ties to Stonecroft Ministries. Bob also volunteered with Agape Flights a not-for-profit which distributes food and medical supplies to mission partners. While living in Sarasota, Bob started a second career working for H & R Block doing tax preparations. He maintained this second career even after moving to Ft Myers. After 20 seasons of doing tax preparation, he retired again at the age of 89. In Ft Myers, Bob remained active with Stonecroft Ministries and taught an adult Sunday School Class at McGregor Baptist Church. He later joined the Village Church at Shell Point and was active in a Men’s Bible Study there. He also thoroughly enjoyed doing volunteer work at The Arbor Medical Center at Shell Point where he resided for the past 14 years. In past 10 years, Bob developed a new hobby which he loved – making personalized Christmas ornaments. In 2020, he made approx. 900 ornaments that he sent to people throughout the year. Christmas was Bob’s favorite holiday – celebrating the birth of Jesus. His Christmas tree was typically on display from October to March. Bob liked to tell how he ‘assisted’ Albert Einstein while attending Princeton; made a hole-in-one at Bobby Jones Golf Course in Sarasota; personally met Billy Graham; and, on his first deep-sea fishing trip in The Bahamas, caught a 7’ -7” Sailfish which he had taxidermized and shipped to OH much to the chagrin of Lorraine. Bob also made claim to meeting former VP Pence and even advised him to tell President Trump to calm down! In the recent past, Bob was part of the annual Sanibel 4th of July parade riding in a convertible with his daughter-in-law, Carolyn, driving as an honored guest being a veteran and part of ‘The Greatest Generation’. He told Carolyn – he ‘felt like a celebrity and that spectators were thanking him for his service. Bob was preceded in death by his wife of almost 62 years – Lorraine Evelyn Benjamin, his parents – Earl Milton & Lily Ivy Putska Benjamin; and siblings Margaret Stolen, Marilyn Woodruff, Ray Benjamin and Dick Benjamin. He is survived by ‘My 3 Sons’ – Gary Adams Benjamin & his wife Melody Hart-Benjamin- Cleveland Heights, OH; Dan Robert Benjamin & his wife Janie Benjamin - Louisville, KY; and, Ted Benjamin & his wife Carolyn Benjamin - Ft. Myers, FL . In addition, he is survived by 5 grandchildren – Nicholas Benjamin-Cleveland, OH; Kirsten Benjamin-Brooklyn, NY; Bryan & his wife Alysia Benjamin – Louisville, KY; Betsy Benjamin-Hart & her husband Brad Hart – Nashville, TN and Shanna Lee-Clearwater, FL as well as 2 great-granddaughters – Ellie Grace and Lucy Lorraine. A Celebration of Life will be held at the Historic Chapel of Sanibel Community Church on June 10, 2021 at 1:30 pm Est, which would have been Bob’s 95th birthday. Bob’s family is asking that rather than sending flowers, contributions be made to one of Bob’s favorite organizations -Agape Flights – Venice, FL; Lifeline Family Center – Cape Coral, FL. Contributions to The American cancer Society and Hope Hospice would also be appreciated.

Robert Owen Benjamin of Ft Myers passed away April 27, 2021. Bob was born June 10, 1926 in Rockford IL, the son of Earl & Lily Benjamin. As the eldest son, he was the watchful big brother to his 4 sibling who at times were referred to as &#8216;The... View Obituary & Service Information

The family of Robert Owen Benjamin created this Life Tributes page to make it easy to share your memories.

Send flowers to the Benjamin family.