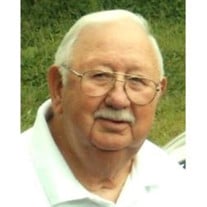 Robert F. Lickfeld Jr. of Cape Coral, Florida passed away peacefully on Saturday, March 6, 2021 with his loving family by his side. He was 90 years old. Robert was born in Camden, NJ on July 7, 1930 to Beatrice (nee Carels) & Robert Lickfeld Sr. and later lived in Fairview, Hilltop & Elmer NJ. He was the devoted husband to his Loving Wife of 44 years, Doris Lickfeld (nee Cunningham,) who sadly preceded him in passing in 1993. Robert is survived by his one loving & dedicated daughter Linda and her husband Martin Brady and by one sister, Myrtle Hubbs (Lowell) & one sister in law, Mary Lickfeld. His siblings who predeceased him are Dorothy, Mildred (Jack), Roberta (Joseph), Vernon (Claire) & Milton (Mary). Bob loved all of his nieces and nephews from both his and his wife’s family. He also has one surviving sister in law from his wife’s family, Patricia Cunningham (David). Bob was most fond of his longtime friend Margaret Weiss and her family who treated him like a second Dad/Uncle/Grandfather. He was in the Army of the United States but received an Honorable Discharge due to having a troubled foot from Polio as a child. Bob worked at Railway Express Agency for 25 years until it closed. He then worked at the Charles W. Lewis School as a bus driver, a driver training supervisor & in bus maintenance. He also became the 1st Union President representing the bus drivers. He was then asked to serve as the Director of Public Works in Gloucester Twp. for a short time serving under Mayor Mullen, and ended his working career with the NJ State Highway Maintenance Division’s Berlin Facility. Bob’s #1 hobby was farming. His lifelong dream was fulfilled when he & his wife Doris moved to Elmer where he had his own farm. He was well known for having a garden for many years with fresh vegetables that he loved to share with everyone from the time he was a young man, until he could no longer continue, due to health issues. He also enjoyed raising chickens for several years and loved sharing their fresh eggs with many family members, friends & neighbors. Bob also raised pigs and goats and a few other animals over the years and enjoyed every minute. When he wasn’t tending to his animals or his garden, you would see him riding around the property on his John Deere Tractor. Bob was a longtime 32nd degree Mason, a Shriner, and was a member of Lodge #120 and later Lodge #160 in Elmer, NJ. He was proud of being a part of the organization and wanted to give back to them what he could. This decision came due to having Polio as a young boy where the doctors at Shriners Hospital in Philadelphia performed surgery on his foot to help him. For this, he was most grateful all of his life. His character & wisdom to tell old time stories and to make you laugh with a joke or two will be missed by everyone who knew him. Oh, and the cat noise! We all knew the cat noise. A Funeral Service for Robert will be celebrated at 12:00 Noon on Saturday, March 13, 2021 inside the chapel at Fort Myers Memorial Gardens Funeral Home, 1589 Colonial Boulevard, Fort Myers, FL 33907, (239) 936-0555. Visitors will be received for Visitation 30 minutes prior to the beginning of the service beginning at 11:30 AM also inside the funeral home chapel. Due to the Covid-19 pandemic, visitors to the funeral home are requested to follow appropriate social distancing guidelines, including personal temperature screening and wearing a mask. For those who are unable to attend Robert's funeral personally, the family invites you to view the service remotely over the internet by clicking the following link (link will open 5 minutes prior to the start of the funeral beginning at 11:55 AM):- https://viewneral.zoom.us/j/99435768979?pwd=dDd0Mk5HSlZwaVp6OENjVjB0aVBKUT09 Viewneral ID: 994 3576 8979 Password: 891470 In lieu of flowers, the family would greatly appreciate donations made in Bob’s Memory to one of the following: Hope Hospice Development Office, 9470 Healthpark Circle, Fort Myers, FL 33908 or to The Philadelphia Shriners Hospital for Children, Attention: Terry Diamond, Development Office Director, 3551 N. Broad Street, Philadelphia, PA 19140 To share a story or photo, leave a tribute or to offer condolences at this difficult time, please visit Robert's memorial webpage located at www.fortmyersmemorial.com and sign his guestbook.

Robert F. Lickfeld Jr. of Cape Coral, Florida passed away peacefully on Saturday, March 6, 2021 with his loving family by his side. He was 90 years old. Robert was born in Camden, NJ on July 7, 1930 to Beatrice (nee Carels) & Robert Lickfeld... View Obituary & Service Information

The family of Robert F. Lickfeld Jr. created this Life Tributes page to make it easy to share your memories.

Send flowers to the Lickfeld family.