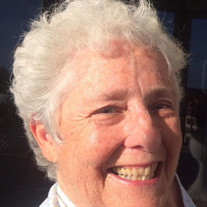 Sarah Elizabeth Swan Bradford passed away from acute myeloid leukemia early Tuesday morning, December 30, 2020 at the Lodge at Cypress Cove in Fort Myers, Florida. Sarah was an amazing woman, full of love and a bit of mischief with a beautiful, irrepressible, and infectious smile. As one friend put it, if ever there was the definition of grace, dignity, sprinkled with a little "sassy" that was Sarah. Born October 26, 1937 in Duluth, MN as the third of four children, Sarah grew up in Midland, MI where she moved with her family when she was five. After graduating from Midland High, Sarah continued her studies at Albion College before taking time off, meeting, falling in love, and marrying a young Dow engineer named Robert (Rob) Bradford. Ever tenacious she went back to school and soon finished her bachelor’s degree at Central Michigan University. Sarah enjoyed life to the fullest, always looking on the bright side of things even amid personal tragedy. She was noted for her kindness and consideration of others; but first and foremost, she loved her family, and passed that love on to her four children. Wherever she lived, Sarah got involved in the community and brought her talents, energy and effervescence with her, active in the Arts, the hospital, schools, her children’s sports teams, politics, book clubs, and community associations. In 1969, Sarah and Rob moved to Hong Kong with four little ones aged 18 months to 8 years. In Hong Kong, Sarah founded the Hong Kong International School Volunteer Program to match college-educated professionals on family overseas assignment to educational requirements and acted as a liaison between the community and American ex-patriots. After two years, the family moved to Melbourne, Australia, two years later to Danville, CA. In 1978 the family moved to Weston, CT where Sarah founded the College and Career planning center at the high school and co-founded a mobile boutique for a fashion designer. 17 years later, Rob and Sarah moved to New Albany, OH, eventually retiring in Fort Myers, Florida where one daughter and her family had settled. Sarah was vivacious, fun, a joy to be around, and truly beautiful inside and out. She helped many people, was so full of love and adventure, also with a stubborn streak. Sarah was strong, resilient, and brave, and these traits helped her push through life’s challenges with grace. While Sarah was a young mother, her own mother passed away from ALS. Sarah beat two different breast cancers, 18 months apart. She had both her knees replaced and was dancing at her daughter’s wedding six months later. She beat the odds against uterine sarcoma. Her youngest child passed away just before her 50th wedding anniversary. And she dealt with pre-leukemia and leukemia for the past year, all while holding up and encouraging those around her. Strong. Resilient. Brave. Sarah’s faith was strong. At the end, she knew where she was going, and she was ready to go. In the last few months, she embraced Tim McGraw’s hit “Live Like You Were Dying.” We love her always, miss her, and will always be blessed by how she impacted our lives. Sarah touched so many lives. Sarah brought joy to the world, spreading her famous smile to so many and she will be missed by people near and far but especially by her family: husband of nearly 62 years, Rob Bradford; her children Elizabeth (Jason) Birkby, Robin (Tim) Couch, and Bob (Melanie) Bradford III; her brother Steve (Joan) Swan, Brothers-in-law Fred Mason and Laurence (Larry) McCarty; her grandchildren Michael Couch, Sarah Kate Couch, Hannah Couch (Abe) Riddering, Maddie Bradford, Walter Bradford and Will Bradford; her great-granddaughters Wyndsor and Elliott Riddering; and many beloved nieces and nephews. She is rejoicing in heaven with her son, William (Bill) Bradford, her parents Mary and Bill Swan, sister Mayo McCarty, brother Pete Swan, sisters-in-law Sue Mason and Anne Swan. (Anne was Sarah’s college roommate before marrying Pete; Sarah and Anne entered heaven arm-in-arm, passing within an hour of each other.) Due to Covid-19, there are currently no memorial plans, but we ask that you remember Sarah with joy and laughter and say a prayer for Rob and their family. In lieu of flowers, we ask that you consider a donation in Sarah’s name to a cause of your choice that will help people in need in your local community.

Sarah Elizabeth Swan Bradford passed away from acute myeloid leukemia early Tuesday morning, December 30, 2020 at the Lodge at Cypress Cove in Fort Myers, Florida. Sarah was an amazing woman, full of love and a bit of mischief with a beautiful,... View Obituary & Service Information

The family of Sarah Elizabeth Swan Bradford created this Life Tributes page to make it easy to share your memories.

Send flowers to the Bradford family.