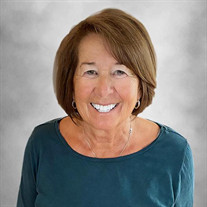 Sarah Joyce Fairweather, 70, of Sanibel, FL, beloved wife, mom, and grandma passed away unexpectedly on March 3, 2022 of natural causes. Born in Needham, Massachusetts, Sarah (Sally) was the daughter of Hugh and Barbara (Boggs) Joyce. She was a Wellesley High School graduate and received her degree in Spanish from Tufts University in 1972. Sally was an academic and an athlete, playing both field hockey and lacrosse in college. Following a year as the Program Director for the Marlborough Girls Club, she earned a Master’s degree in Counseling with a minor in Business from Indiana University. In 1976, Sally moved to Pittsfield, MA were she became the Executive Director for the Pittsfield Girls Club. She also served as a Board member for the Counseling Center of the Berkshires and spent many nights skiing. Most notably, Sally met her husband, Paul Michael (Mike) Fairweather! In 1980, Sally married Mike and moved to New Hampshire. She was an Executive Director of Human Resources for Integral Data Systems. Once becoming a mother to her son, James, and daughter, Kaitlin, Sally continued her career as an independent HR Consultant. Sally was involved in numerous volunteer activities, beginning when she was a child achieving the highest Girl Scout honors with her beloved Troop 2, who have remained great friends. In addition, Sally volunteered as a youth sports coach, Pan Mass Challenge supporter, and Board member of the Beach Bike Ride for Charity. She and Mike served on the Advisory Board for CRU, a global Christian campus ministry, and the Sanibel Community Church, where she facilitated Bible Studies and served on numerous committees. Sally was a devoted wife. In 2003, her husband Mike was diagnosed with stage IV cancer. Both Sally and Mike retired to focus on managing his health. With the unwavering support and care from Sally and by God’s grace, Mike’s 3-year life expectancy turned into 15 years together filled with many memories as a family. Sally enjoyed writing poetry for her family, making personalized quilts for each new baby of the family, and cultivating her grandchildren’s imaginations with creative play. Within her family, she was known for her signature chex-mix, brownies and christmas cookies, beautiful handmade Christmas gifts, shell lamps and the most thoughtful cards for every occasion. Sally had a smile that would light up the room and lived a life of thanksgiving, understanding that what mattered most was her family and friends, and her trust and faith in the Lord. Sally was a beloved, mother, grandmother, sister, aunt and great-aunt to a large and adoring family. She leaves behind her beloved children, James and his wife, Ashley (Coll) Fairweather, and Kaitlin (Fairweather) Fryling and her husband, Paul. Sally was blessed with loving grandchildren, Madison Coll and John Paul Fairweather, and Emma James Fryling. She was the adored “Aunt Sall” to 12 greatly-loved nieces and nephews, and 14 grand-nieces and grand-nephews. Sally is survived by her brother, Steve Joyce and his wife Cinda, and her sister, Cathy and her husband Jack Brennan. She was predeceased by her parents, her husband, Mike, and her brother, Dave Joyce. Sally’s Celebration of life will be held at Sanibel Community Church on March 19th, 2022. The service will start at 11:00 am in the Sanctuary with a luncheon to follow in Fellowship Hall. Sally’s interment will be with her husband, Michael in the columbarium at Sanibel Community Church, Sanibel FL. There will be a second service in Greater Boston during Spring of 2022. In lieu of flowers, donations can be made to a cause Sally was passionate about; helping family members fight cancer. Sally’s nephew, Tim Albert, is battling brain cancer and requires treatment in Germany starting in April 2022. Please visit his GoFundme page to donate in Sally’s memory. Link: https://www.gofundme.com/f/Help-Tim-Fund-Vital-Brain-Cancer-Treatment To share a story or photo, leave a tribute or to offer condolences to the family at this difficult time please visit Sarah's memorial webpage at www.fortmyersmemorial.com and sign her guestbook.

Sarah Joyce Fairweather, 70, of Sanibel, FL, beloved wife, mom, and grandma passed away unexpectedly on March 3, 2022 of natural causes. Born in Needham, Massachusetts, Sarah (Sally) was the daughter of Hugh and Barbara (Boggs) Joyce. She was... View Obituary & Service Information

The family of Sarah Joyce Fairweather created this Life Tributes page to make it easy to share your memories.

Send flowers to the Fairweather family.