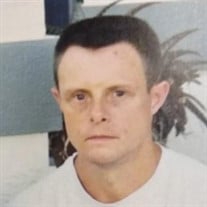 William Edgar ("Eddie") Harper, born April 14, 1963, in Knoxville, Tennessee, transitioned to his eternal heavenly home on April 19, 2021, where he was reunited with his mother, Shirley Newman Harper (1998) and father, William Roy Harper (1989). He is survived by his loving sister and long-time caregiver, Deb Harper; his nephew, William Teasley (Giavanna) and their four-year-old twin sons Ashton and Alexander Teasley; and by his beloved Tennessee cousins. Born with Down syndrome, Eddie made his home with Deb and William after his parents' passing. For almost thirty years, he was the "keeper of the castle," and embraced the role of big brother to William. They spent many happy hours on the soccer fields and in the dojo, where they both earned their brown belts in karate. He was a great help to Deb at home for many years until the onset of Alzheimer's in 2017. Eddie was an accomplished athlete, earning a bevy of medals for track and field in Special Olympics. Eddie shared his father's passion for bass fishing and enjoyed hauling in the big ones with Dad in the Tennessee Valley lakes. An avid Tennessee Vols fan, Eddie's blood ran orange! He loved attending games with Dad in Tennessee and was glued to his Florida TV whenever the Vols played. He had a passion for wrestling, attending Wrestlemania events in both Tennessee and Florida, cheering on his favorite wrestler, John Cena. Eddie's enthusiasm for life was contagious, and he brought pure joy to those who were blessed to be around him. While he will be sorely missed, we rejoice knowing that he will spend his days fishing on the shores of Amazing Grace! A visitation will be held from 10:00 AM to 12:00 PM on Friday, April 23, 2021 at Fort Myers Memorial Gardens Funeral Home, 1589 Colonial Boulevard, Fort Myers, FL. Eddie will be entombed in his family mausoleum in Greenwood Cemetery, Knoxville, TN. Donations in Eddie's memory may be made to the Alvin A. Dubin Alzheimer's Resource Center, 12468 Brantley Commons Court, Fort Myers, Florida 33907.

The family of William Edgar (Eddie) Harper created this Life Tributes page to make it easy to share your memories.

Send flowers to the Harper family.